Note:  This story is getting a LITTLE dated, but still very relevant.   I have added an FAQ to this from the multiple emails I have received from others trying to kill their own rats.  FAQ IS HERE

A few nights ago, we awoke to a strange sound from behind our stove.  It sounded as if  a mouse had found it's way into our house...   Well we were wrong.   Upon pulling out the stove, I discovered a large brown RAT munching on one of my dogs bones.   It didn't' seem to mind that we were there looking at it as it slowly climbed back under one of my kitchen cabinets...

Of course..  I have set out to kill it.   The next place he seemed to find refuge in was underneath my refrigerator.  He seems to have a hankering for Styrofoam.  I put several rat poison baits behind the fridge, under the stove and under the cabinet..

The next morning, all the poison was gone.   BUT he is still alive several days later.

I have also had a live trap for it out every night in the furnace room where he has also been sighted.

Early this morning he got into my parrot's cage..   Now my parrot did NOT find this amusing at all to find a rat in his food dish, and they proceeded to get into a pretty decent fight.  The ruckus awoke me and I dashed to the kitchen to see what the heck was going on.   When I uncovered the birdcage, my parrot, dropped the rat.  The rat ran back to the sink cabinet and underneath it.  (Right past my dog I might add).
Today, I am staying home from work to make sure my bird is ok.  He is missing a good chuck of feathers from his head..    From what I could see when I opened the cage up.. he was not loosing the battle.  Our Vet says he should be ok..  They have feathers for protection and basically the rat just got a mouthful of feathers, but better safe than sorry.
[Additional Information]
Back from the Vet, it turns out that it WAS NOT so simple as a mouth of feathers.. It was a very major bite wound to the base of his skull.  The vet was amazed that he was not killed instantly.    He had some secondary bites to his face also.   (Note added a week after this was written:  He was at the vet for a WEEK on antibiotics and under their care!)

So.. As a final attempt to get the little sucker, I have taken my kitchen cabinets apart and found his little hole.  This is under my sink (With the bottom of the cabinet removed).   I will put the bottom back in place to keep him from climbing UP the pipe and just wait for the SNAP..  (See picture below).. 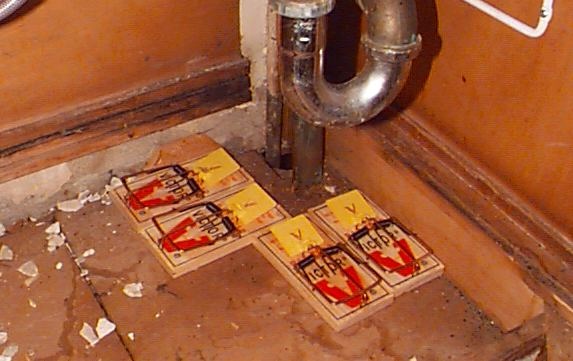 Backing up this set of traps, is a nice meal of poison rat bars for him to much on (If he makes it over the traps somehow).  I also pitched about 5 bars down the hole for a pre-death snack.

Watch for updates here..... Hopefully a nice picture of a rat-in-half!

Comments, Suggestions?   Drop an e-mail to [email protected] .   And I don't' want to hear any crap from the rat lovers out there or the be kind to animals people.   I tried to trap it live first, but he is not falling for it.  He is in my house, and well he is going to have to deal with me.   No different than if someone was in my house every night stealing my food.  I have a 12 gauge for just sort a thing!  .

Click the image for a closeup!
He was very much alive when I found him like this.  He is currently setting in a 5 gallon bucket with a cup of bleach mixed with ammonia.    I doubt he will be round much longer.
UPDATE:  I was correct.  My little magic mixture did it's job.  Just for you Animal People out there.  It would have been very quick and painless.  Much better than just starving to death with it's head in a trap.

JUST for the record..   This makes me feel much better about the $300 bucks my bird's vet bill!